Husks of steel and synthetic muscle fibers propel a massive machines as tall as small office buildings. Each metal monster lumbers about, sporting enough weaponry to eradicate those offices, plus the entire city block. These massive icons of war clog the tabletop battlefield.

These are the tools of war BattleTech have offered for some thirty years.

Yet, one of the first barriers to entry in this game rests at its very core. The most common issue for new players with the traditional BattleTech system lies in its depth and complexity. BattleTech is not a system for those daunted by preparing their taxes. The pieces of paper that compose the meat of a BattleMech even look complex before a pen is ever even applied.

So is Alpha Strike, its new fast-paced system any fun?

The complexity of BattleTech is usually the first elephant in the room that shambles in with the classic rulebook. The entire system is centered around the idea of modifiers. Did your ‘Mech walk this turn? Plus-one modifier. Run, that’s a plus-two. And if you had some heat on that mech, add some more penalties. Range? Target speed? Jump jets? Weather conditions? Terrain? Oh yes. More modifiers.

Not only are these modifiers numerous, requiring either a comprehensive cheat-sheet or intense memorization, but their very nature has a tendency to slow gameplay. Your ‘Mech moves at 4 hexes walking speed? Wait. You have heat. That slows you down to 3. Rough terrain? 2. Changing facing? That’s one point per tick. When piloting the bigger mechs in the board game, it can literally take half the game just to get its guns to the front line.

“Wait. Why did the drop-ship drop us off three klicks away from the battle again…?”

Alpha Strike attempts to combat some of the overwhelming complexity of the traditional BattleTech system by, for the most part, removing many of the stacking modifiers. Instead, the system replaces those with general approximations listed on the individual unit’s descriptions. Instead of full page printouts of BattleMechs, Alpha Strike offers playing card-sized prints that reduce a dizzying array of weapons (each with, yes, their own modifiers) to simple damage scores. 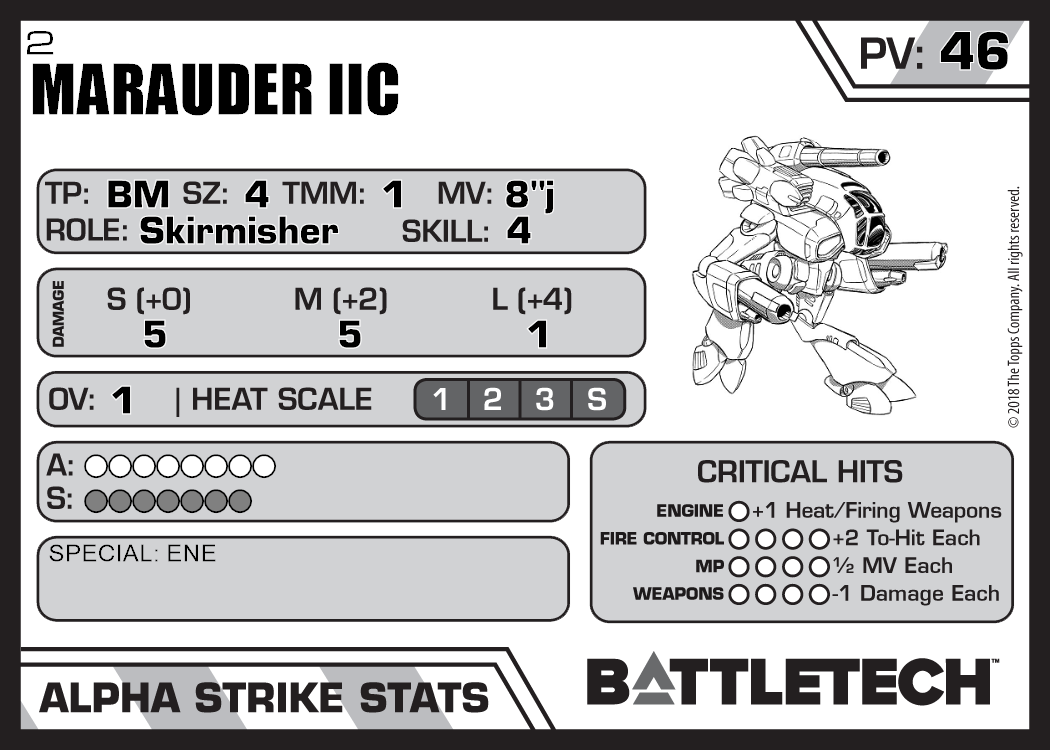 The system still draws a lot of its source from the full-scale game. Atlas BattleMechs still move 3 hexes per turn. Stock weapon values are calculated and transformed into short, medium, and long range tallies. But many key aspects of the game have been revamped.

Movement, perhaps, is the most key. Changing hex faces no longer costs a movement point. This allows slower mechs to get into the fight more quickly. When dealing with the standard 18 by 24 map boards that ship in the Anniversary starter set, I found myself rolling to target enemy mechs as quickly as the very first turn.

The 30-point heat scale has been completely replaced with a 4-point slider. Gain four points of heat from either overheating your mech or taking flamer damage, and your mech shuts down automatically. But the penalties for running hot have vanished, reducing the math required to calculate movement, targeting, and the like.

Damage has also been greatly simplified. Fans of BattleTech’s engrossing crit system might be disappointed to learn that the internal components, weapons, heat-sinks, and the like of each BattleMech have been replaced with generic scores. But those looking for quick battles with many units will find a lot to like in such a simple solution. As hinted earlier, Short, Medium, and Long range tallies speed up damage resolution greatly. Instead of calculating individual hits per weapon, damage is simply done in full, each point ticking off a single “hit-point” of armor or structure.

The game does lose a little bit of its depth, however. Gone are the days of rejoicing when a lucky shot takes out an enemy Hunchback’s AC20. Instead, Alpha Strike keeps critical hits alive by adding (you guessed it!) modifiers based on hits taken to generic locations like “Engine”, “Fire Control”, “Movement Points”, and “Weapons”. A tick in any one of those blocks results in a stacking modifier against the related system. Simple, but it loses some of the immersive depth in favor of a quicker game-play pace.

“These twin PPCs ain’t for show! Unless this is Alpha Strike. Then they’re just a number.”

Damage scores also mean that attacks are an all-or-nothing affair. That red Marauder shown above can’t split its attacks with those PPCs and that AC5 anymore. Instead, all of its damage goes to a single target per turn, using only one of the three range tallies shown above, depending on the distance to target.

As a result, mechs do tend to feel a little more squishy. Armor and Structure have been simplified to bubbles on a playing card. Since total damage is binary – either hit or miss – those armor bubbles tend to get filled rather quickly. There’s no way to spread the damage out either. Damage doesn’t go to a side torso or a leg anymore. What you see in your armor is what you get.

However, “squishy” mechs do result in faster games. This allows players to control more units per game. Lance versus Lance combat does not take anywhere near the length of time it used to. The very first game I played in Alpha Strike was a two-versus-two duel, mediums and lights, and it took about forty minutes to complete. Full-scale battles no longer require an entire afternoon’s time.

This sets up the possibility for entire campaigns spanning only a day’s worth of game-time, but that’s an article for the future…

Shorter fights allows for bigger battles. Many mechs died to bring us this photograph.

Alpha Strike is a fast-paced, worthy addition to a BattleTech fan’s lineup that should certainly be considered when introducing new players to the game, starting vast campaigns with many units, or attempting to get a quick game of stompy stompy machines into one afternoon. It’s flavor is still distinctly BattleTech, even if the mechanics themselves are greatly simplified.

And let’s be honest. There’s no feeling like the pride of seeing your 80-ton monstrosity strutting across the battlefield over the mangled bodies of smoking metal gods.

So gear up, and be ready to drop, Mechwarrior. The battle rages on.

“Hey, man… Hate to ask. But should we tell them their colors are really clashing?”