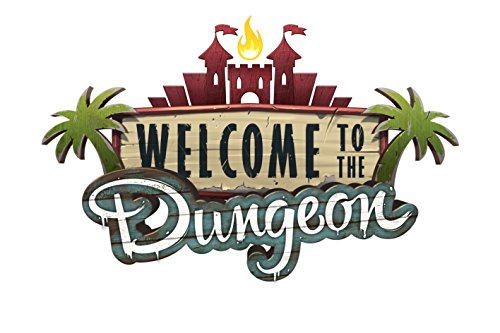 Dungeon is best played with only a couple friends. It’s a round-robin game where a generic fantasy hero makes perilous journeys into… you guessed it… a dungeon. Players either choose or randomly select from four included hero archetypes – Warrior, Barbarian, Mage, or Rogue, each of which come with their own unique set of equipment (more on this later). The selected hero is shared by all players, but only one player may enter the dungeon at a time.

Survive the dungeon twice… or be the last player standing that didn’t get slaughtered in the dungeon… and you win. 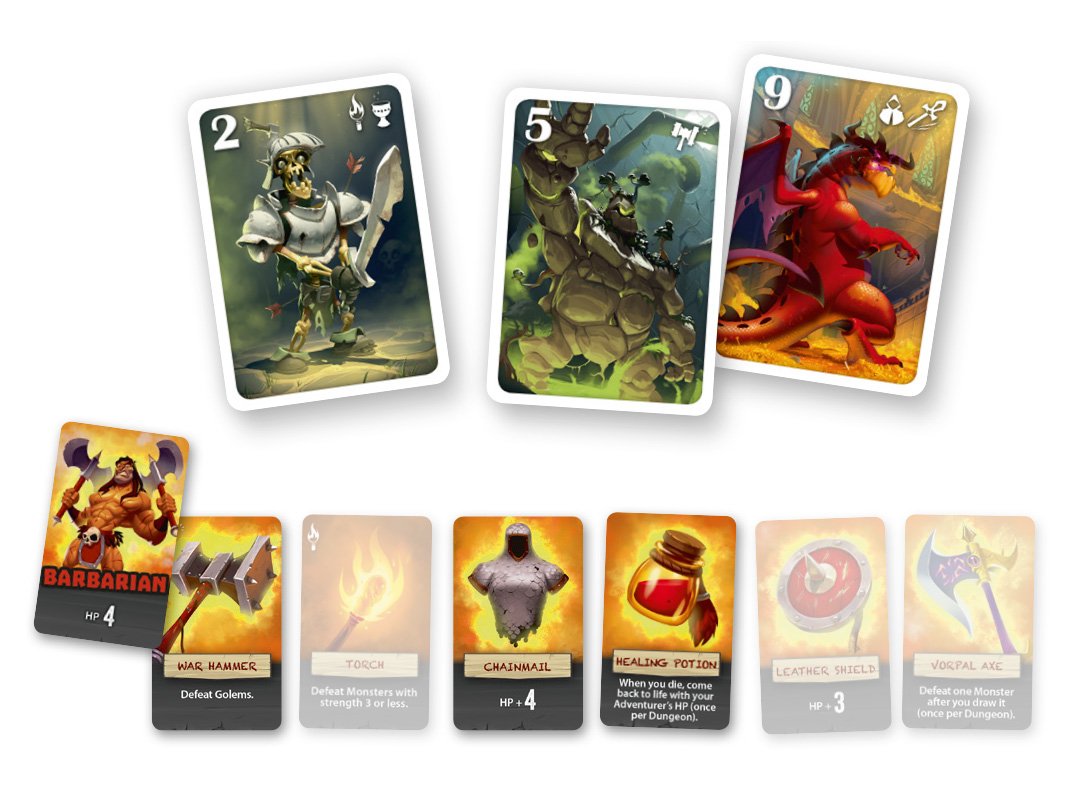 After selecting a hero to lead our players through this game, the fun begins.

Each turn, players have the option of drawing from the monster deck or passing and doing nothing for the remainder of the round. The monster deck is composed entirely of nasty creatures ranging from pitiful ankle-biting goblins to the fearsome and quest-ending dragon. This is where players discover creatures to populate the dungeon with the idea of either making it more difficult for other players or – hopefully – easier for themselves.

Once drawn, players have the option of either sending the monster to the Dungeon Deck to be faced later in the round or discarding it and a piece of equipment from the hero’s stockpile. As you probably figured, equipment is quite important. Equipment is how the hero survives the dungeon, and this is where the press-your-luck element kicks in.

Each hero has six somewhat-unique pieces. Some are straight-forward, such as shields or armor that provide more hit points. Others are a little more flexible, such as the Rogue’s Vorpal Dagger that can automagically defeat one Monster of the player’s choice prior to entering the Dungeon (assuming it’s actually in the Dungeon Deck). The hero only takes what equipment is left to him into the dungeon with him, and must use only those pieces to face every creature in the Dungeon Deck.

Sacrifice too much equipment during the drawing phase, and… well… bad tidings abound.

If you recall, I mentioned earlier that the hero is shared by all players, but only one player may take him or her into the dungeon at a time. Every time a player discards a monster from the monster deck and sacrifices a piece of equipment from the hero’s stockpile, it gets that much more difficult to survive a dive into the imminent dungeon. Lose too much equipment, and it’s suicide to even try.

Go ahead. Ask him if you can “borrow” some of his treasure. I’m sure he’s reasonable.

I mean, that dragon doesn’t mess around. And you won’t know whether or not your opponents have quietly placed him into the Dungeon Deck until you go in.

Every time a player draws a card, the dungeon gets more and more difficult to survive. Either a monster gets added to the stack, or a piece of valuable equipment is smothered and crumbles to useless dust. Whenever it’s your turn to draw, you must decide if you think it’s even possible for the hero to survive the dungeon given what equipment he has left and how many monsters are sitting in that Dungeon Deck – or if you should play it safe and pass, leaving it to someone ELSE to face the perilous dungeon.

As a player, you must find that balance to win… or find the cunning to trick your opponents into heading into the dungeon to their doom.

There’s something about this game that can be addictive while playing. Each turn has that just one more! lure to it. Games can be won by avoiding the dungeon altogether, and players have to balancing bowing out of the drawing while still making it difficult for their opponents. You can just as easily hang yourself out to dry by drawing that one more!! card, only to watch in horror as all your opponents bow out of their turns, leaving you to face the dangers you just summoned.

Welcome to the Dungeon is a fun time-killer that makes a good addition to any board-gaming party as filler. Rounds go quickly enough to sneak a game in while waiting for a buddy to go get the pizza. With a maximum of four players, Dungeon might not make it into your regular party rotation, but works great for smaller groups looking to bluff and blunder their way through colorful cards and cute-looking heroes.

So grab your sword and shield. Just pray your opponents don’t snatch it away from you before they shove you into the Dungeon.